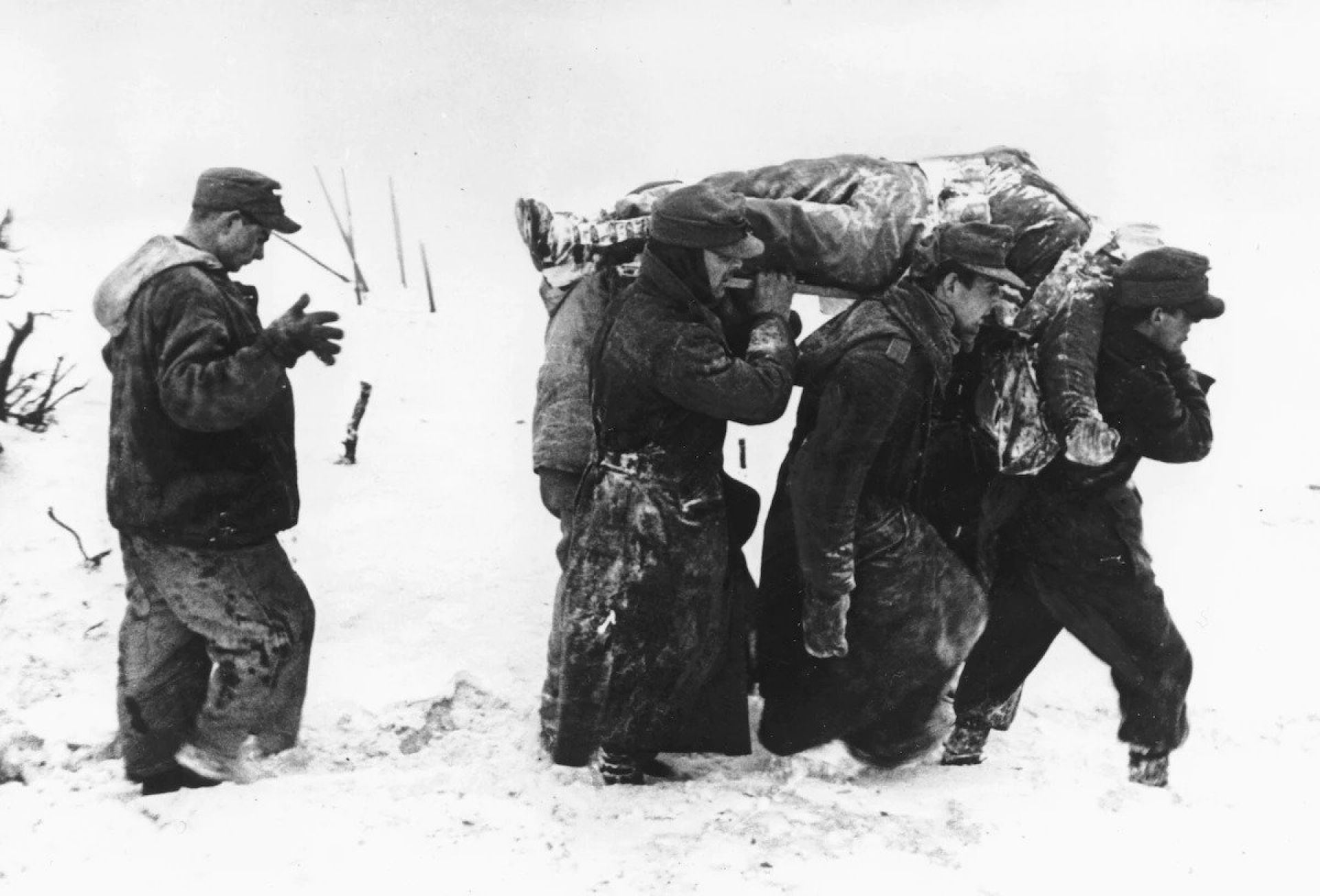 German prisoners of war carry the body of an American soldier through deep snow during the Battle of the Bulge, in the Ardennes sector of Belgium in late 1944. Nearby, German and U.S. soldiers shared a Christmas Eve dinner. (AP)

On Christmas Eve 1944, heavy snow blanketed the Hürtgen Forest in Germany, near the Belgian border. Inside a tiny cabin deep in the woods, 12-year-old Fritz Vincken and his mother, Elisabeth, listened to warplanes and artillery shells as the Battle of the Bulge neared its climax.

As they tried to make the most of an inauspicious holiday, they couldn’t anticipate that a true Christmas miracle would soon come to their modest home.

Months earlier, the mother and son had moved to the isolated cottage when their home in nearby Aachen had been destroyed by Allied bombing. For Fritz, who first recounted his story in a 1973 article for Reader’s Digest, the remote cabin offered a reprieve from the death and destruction of World War II.

They were alone because Fritz’s father, Hubert, who baked bread for the German army, had recently been called into service as Allied armies pressed closer to Germany. Fritz and Elisabeth held little hope that Hubert would be able join them for Christmas Eve dinner.

Less than two weeks earlier, the tranquility of the Hürtgen Forest had been shattered when Field Marshall Gerd von Rundstedt unleashed 30 divisions hidden in the nearby Ardennes Forest of Belgium for the last major German offensive of World War II. Vicious fighting erupted across the Western Front, including around the Vincken cabin, as Allied armies desperately tried to repel the surprise attack amid blizzard conditions.

As mother and son prepared Christmas Eve dinner, they were startled by a knock on the door. The closest neighbors were miles away. With Fritz by her side, Elisabeth opened the door and saw three young soldiers, all armed. Two were standing; the third lay in the snow with grievous wounds. The men spoke a language unknown to the Vinckens. Fritz realized they were Americans.

“I was almost paralyzed with fear, for though I was a child, I knew that harsh law of war: Anyone giving aid and comfort to the enemy would be shot,” Fritz later remembered.

Elisabeth also knew the penalty for harboring Americans. But the soldier bleeding in the snow was young enough to be her son. She motioned for all three to enter the tiny cabin. Fritz and his mother helped the severely injured man into a bed and tended to his wounds.

None of the Americans spoke German, but Elisabeth and one of the men communicated in French.Elisabeth, seeking to stretch their meager meal to accommodate the guests, told Fritz, “Go get Hermann.” Hermann was a rooster being fattened in case Hubert made it home for dinner. He was named for Hermann Göring, a Nazi leader for whom Elisabeth had little regard.

Suddenly, there was another knock on the door. Fritz opened it, expecting to see more Americans lost in the forest. Instead, he was alarmed to find four German soldiers. The young men had become separated from their unit and were looking for shelter from the cold.

Elisabeth went outside to speak with the new arrivals, telling them they were welcome to spend the night but had to leave their weapons outside. When the young Wehrmacht corporal started to object, Elisabeth looked at him sternly and said, “It is the Holy Night and there will be no shooting here.”

While the Germans placed their weapons next to the woodpile, Elisabeth went back into the cabin and returned with the Americans’ guns. When they were all gathered inside, the enemies stared at each other in stony silence, wondering how long this temporary truce would last.

Elisabeth took command of the scene, Fritz wrote in Reader’s Digest, and had the combatants mingle close together. She realized that a meal of Hermann wasn’t going to satisfy such a large group, so she told her son to get additional ingredients for the chicken soup she was preparing.

“Quick, get more potatoes and some oats,” he remembered her saying. “These boys are hungry, and a starving man is an angry one.”

When the wounded American started moaning, one of the Wehrmacht soldiers examined him. He had been a medical student before the war and realized the injured man had lost a lot of blood. “What he needs is rest and nourishment,” the German said.

Eventually, everyone began to relax. Both groups of soldiers searched their backpacks for food to share. The Wehrmacht corporal contributed a bottle of red wine and loaf of rye bread.

Soon the soup was served. Elisabeth bowed her head and said grace. Fritz remembered seeing tears in his mother’s eyes and noticed that some of the soldiers wept too, perhaps thinking of their families far away or feeling grateful that they wouldn’t have to fight on Christmas Eve.

The next morning, the soldiers prepared to go back to war. A stretcher was crafted from a pair of poles and Elisabeth’s tablecloth to transport the wounded American. As the U.S. soldiers checked a map, the German corporal showed them how to get back to their own lines. They then shook hands and headed off in opposite directions.

“Be careful, boys,” Elisabeth called after them. “I want you to get home someday where you belong. God bless you all!”

Not long afterward, the war ended and the Vinckens were reunited. Fritz immigrated to the United States in 1959 and later opened a bakery in Honolulu. Hubert died in 1963, and Elisabeth followed in 1966.

Fritz always hoped to meet the soldiers again, though he knew his chances of seeing the Germans were not good, given their staggering casualty rate at the end of the war. He thought publicity might help, starting with his 1973 Reader’s Digest article, which President Ronald Reagan mentioned in a 1986 speech. In 1995, Fritz appeared on national television, telling his story on “Unsolved Mysteries” to host Robert Stack.

A nursing home chaplain in Frederick, Md., saw the episode and remembered a resident telling a similar story. He contacted the TV producers about Ralph Blank, a World War II veteran who had been a sergeant with the 8th Infantry Division in 1944.

In 1996, Fritz flew to Maryland to meet with Blank, who was 76 and in poor health. They recognized each other immediately and reminisced about their shared evening of peace during a hellish war.

The reunion was filmed and shown on “Unsolved Mysteries” later that year. At one point during the episode, Ralph turned to Fritz and said, “Your mother saved my life.” For the former German boy who was now an American citizen, that moment was the high point of his life.

“Now I can die in peace,” he told the Honolulu Star-Bulletin. “My mother’s courage won’t be forgotten and it shows what goodwill will do.”

In a 1997 interview, Fritz spoke of the lessons he learned from the Christmas miracle.

“The inner strength of a single woman, who, by her wits and intuition, prevented potential bloodshed, taught me the practical meaning of the words ‘good will toward mankind,’” he said, adding, “I remember mother and those seven young soldiers, who met as enemies and parted as friends, right in the middle of the Battle of the Bulge.”

Originally published in The Washington Post by Dave Kindy.